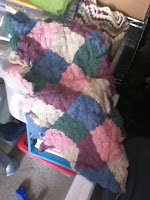 When I first learned how to crochet back in 2000 I was between my freshman & sophomore year of college and these sweet old ladies at camp taught me how over a weekend. My first project was going to be a purse but it ended up more triangular than rectangular but I was hooked on the craft of crochet. After that I started making a few blankets and my mom seeing how much I enjoyed it fed my new hobby. She was on a trip and stopped into a local yarn shop found a cute pattern and bought me enough yarn to complete the project. Love her! So I started on the pattern. Graphed out how many squares of each color combination I needed. Tied off some knots, sewed the square together, got frustrated, got board, packed it away. Got married, moved 7 times and still it remained. I had spent at least 6 months had just a few rows done, a couple of squares to add and tons left to do. But I hate an unfinished project so earlier this month at least 9 years (if not more) later I pulled it out. And cringed. Short ends, tied knots bad joins.

I was determined to finish the blanket and figure out how to undo some of the mess I did with the knots and weave in ends correctly. I started with finishing all the blocks I needed with nice long tails for sewing. The started on the sewing task. My least favorite part of this entire endeavor I don't enjoy hand sewing at all so this was quite the task to join all of these. I didn't like the join method in the pattern as it was sc-ing the pieces together creating a ridge on the back but I like the smoothness of whip stitching and how it can be flipped to either side. 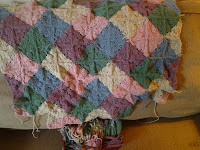 Once all the pieces were done and sewn it was on to the edging and making sure I had the same number of stitches on all sides which was tough given the difference in the tensions of the old pieces and the new pieces but once that first go around was done realized how much of a difference the tensions make in a blanket, wow! So did a quick wet blocking. Pinned down the blanket to a mattress, and layered a wet towel over it just to dampen the blanket some so I could continue with the rest of the edging easier. 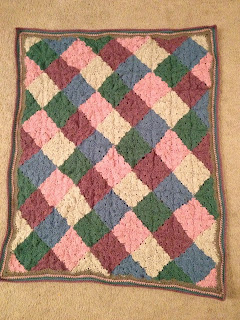 And now the blanket is done! Edging all finished, still a little uneven but need to get a set of blocking pins the little straight pins I used came out too easily and didn't hold some of the edges in place well enough and the overall shape and drape of the blanket would benefit from a good steam blocking since it's a wool blend.

But isn't it pretty? I won't be doing this pattern again but I do have some yarn left that I think I'll make a couple of granny square loveys with. I've been wanting to make them for a while now.

Posted by Unknown at 6:31 AM No comments:

For Ordering and More information 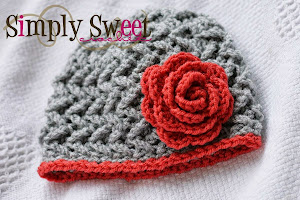